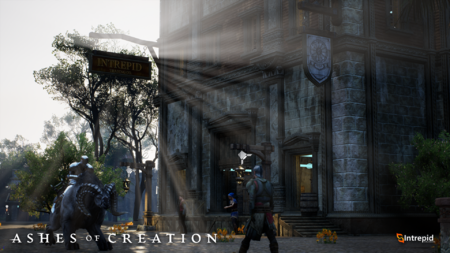 Social organizations are ways for players to interact with the world around them in a different manner. They are about creating micro communities within the game.[2]

The whole idea of these societies is that they are a mechanism for progression that do not have to rely on your level progression. These are different progression paths that players can participate in. If you don't want to leave a node in your gameplay experience and you want to find as much as you can do within that city, these offer those things. Now, some quests might take you outside of the city to you know hunt and pursue things, but you could also perfectly be a person that is a merchant and purchases them from other travelers instead of having to go do it yourself. We want to offer players a diverse method of progression; and these systems house those benefits.[4] – Steven Sharif

Sometimes two organization's goals might not align with each other and there'll be conflict there, but it's not going to be like everybody in the Traders Guild is at war with everybody in the Thieves Guild.[5] – Jeffrey Bard

Different types of Social organizations have different objectives relating to their specific types of game play.[2]

Players may only pledge loyalty to one social organization at a time.[2]

If you are part of a town that has been developed and the Scholar's Academy has the most amount of work from the players, that becomes a patron organization of the city so will grant certain benefits and services to players that they can participate in, that relate to their position within the Scholar's academy. Augments are a huge thing that these different societies will offer. They're not going to be a lot of arguments within the society's progression: It will probably be around 3 or 4 that exist per organization. So, you'll have to really investigate and study which organization is most beneficial for the path you've chosen with your archetype or whatever role you wish to have in the world.[4] – Steven Sharif

Social organizations have a role in artisan progression.[4]

Social organizations may relate to which bosses might need to be killed first and may affect building progression of a node.[2]

A player progresses through a social organization by accomplishing tasks or quests.[2] There are hierarchical paths pertaining to specific questlines for the organization's thematic.[2] These quests will either be cooperative with or adversarial against other nodes based on their mutual war status.[9]

- For example, a Thieves' guild may have objectives and quests toward securing a particular item to enable players to advance within the organization.[2]

Social organizations are going to have questlines that players participate in which some will include sabotage, espionage, intrigue... While it's not necessarily player versus player in the combat sense, it is player versus player in pitting communities in those organizations kind of against each other in a competitive atmosphere, where only some things can be accomplished by certain communities; and not everybody can succeed at a particular task. So, I think that that's a unique way to involve meaningful conflict that doesn't necessarily have to relate to PvP, because obviously we have a lot of PvP systems in the game and and there are many ways for players to participate in player versus player combat; but we also want to make sure that from a progression standpoint, from a system standpoint there are going to be abilities of individuals to follow these questlines, these tasks that will pit organizations against each other, specifically from an organizational standpoint.[10] – Steven Sharif

A player can switch organizations, but will lose progress in their previous organization.[2]

An affiliation tree determines which entities can participate in attacks against other entities within its hierarchy.[12][13]

There's node citizenship. There's guild. There's alliance. There's party. There's raid. There's family. All of these types of affiliations have a hierarchy. The highest of which is your node affiliation: So your citizenship is your greatest superceding relationship, which means if you were a part of a guild and the guild has multiple nodes in which its members are citizens of, if there was a war between two of those nodes, the members of those nodes would be first and foremost citizens who defend that node, even against their own guild members.[12] – Steven Sharif

All of these things have some hierarchy; and within that hierarchy there's the ability to participate within certain systems. So for example, if you have a node that has fallen under your vassal state and you're a citizen of the parent node, then you could participate in a siege against the vassal node but if you're a citizen of the vassal node you could not participate as an attacker against the parent node; so there's a hierarchy, unless you were to renounce your citizenship.[13] – Steven Sharif

As nodes develop, player governments may open a Stock exchange (also called Stock markets and Sharemarkets) where players can buy and sell shares in Nodes, Guilds and Social organizations.[7][14]

Whether an organization is the patron of their node means it contributes the most amount of work to the node from its members.[4]

Patron guilds unlock the following benefits for their members.[16]

Any number of guilds can be in a node, but the number of patron guilds within a node is limited by node stage.[17]