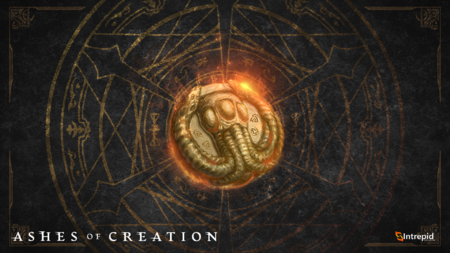 Let's say for example you have an event- that is the predicate for this event kicking off was that a raid boss was killed in a nearby dungeon; and it was killed for the 50th time, or it was killed by some particular storyline end or whatever the predicate system is in the world state to say "hey kick this event off". Well, when that event kicks off a number of spawners activate around the node and NPCs start moving towards a node. The node is notified, like "hey there's something happening here, you guys should put up your defenses focus on this thing"; and those with monster coins who are within the area and are not a citizen of the node or an affiliated node can choose to activate the monster coin to become one of the monster types that exist within that event; and that event has a number of targets; and let's say for this particular story arc the thing was we need to find artifacts and better weapons in order to defeat these bosses at the bottom of this dungeon; and a lot of players went through that process they found those weapons and whatnot. Well those things might be stored in three buildings that exist within the node. They might be stored within the armory; they might be stored within the barracks; and they might be stored at a workshop that has access to a workbench that they've chosen to build and that could also potentially serve as a predicate; and when you become the monster those are your three objectives; and you don't need to destroy all three. You potentially just need to destroy one, or you destroy as many as you can if it's a time selected event; and you might have targets that are NPC-related as well, such as the blacksmith that's at the workbench, or the captain of the guard who's at the barracks, or whatever who's at the armory; and you get to go in and you get to kill other players potentially during this who are helping to defend the city; and you can also make it to the objectives and potentially help in destroying the building, or killing the NPCs. That is the type of objectives that would exist within a monster coin system for an event.[2] – Steven Sharif

Sometimes the disturbed beings could take the form of packs of dire wolves, hordes of zombies roused from their graveyard, or even, rarely, an epic-tier dragon flying out of a volcano once a node reaches its maximum level. In any case, the disturbed monsters have to tackle a series of destructive objectives, which can either be handled by the the AI or, more interestingly, by a player. The player in turn would attempt to complete all those actions much as in a multi-objective quest, hopefully before other players brought him or her down.[4]

Monster coins enable players to play as monsters within the monster coin event system. This ranges from playing as a horde of zombies, to becoming a massive dragon.[5][6]

During a Monster Coin Event, players will be able to activate Monster Coins, allowing them to become monsters and wreak havoc! These Events can be triggered in a variety of different ways, and in some cases they may even provide cosmetic rewards.[1]

When you're playing as a as a monster from the monster coin use as part of an NPC event that might be targeting a node, or other some other open-world objective or POI, or dungeon, you get to participate as a monster and your focus is completing objectives that have already been prescribed as part of the event.[2] – Steven Sharif

The Ancients are not going to be part of the monster coin system.[12]

Traditionally, the Ancients are not going to be part of the Monster Coin system. These are the primary antagonists of the story. From a lore perspective, and one of the reasons why they're not a part of the Monster Coin system, is because their souls have really developed almost to the point of perfection in manipulating the Essence for more corrupt uses. They haven't quite gotten there, and who knows if they ever will, but that kind of attunes them out of the possibility: The reason why the monster coin system is possible with other creatures.[13] – Steven Sharif

Use of monster coins 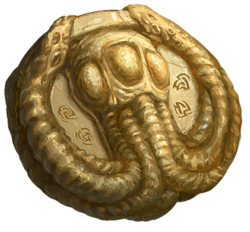 We are very well aware that systems if they can be gamed they will be gamed and we're making sure to develop the monster coin system so that there is no potential for gaming there.[19] – Steven Sharif

Monster coins are obtainable from:

Monster coins are not tradeable.[7]

Monster coin events (Bosses) cannot destroy or delevel nodes.[21] They can disable certain buildings, services and NPCs within a node.[22][9] Node sieges are the chief mechanic for destroying nodes.[21]

For example, if the service building that got disabled was a blacksmith's building that housed a workbench, which was the only workbench in the region capable of crafting a t5 (or tier 5), or high-tier quality equipment, then of course that would have ramifications economically, as those pieces of equipment that are already readily available would raise in prices; and because there would be a issue within the supply chain of those items being introduced into the economy, you would potentially have some supply and demand changes economically and that could span regions: that could be global even.[23] – Steven Sharif

There is a progression system that levels a player's monster skills based on how often they participate in monster events.[24]

In Ashes of Creation a large portion of world events revolve around the environment reacting to the player. This means that as players are exploring the world and developing civilization around them the environment is responding to this encroachment by spawning dynamic events and creatures to attack those developing cities. These events occur in 3 different types: the Legion level the Elite level and the Epic level.[25] – Steven Sharif

Legion monster coin events are common events that occur for Nodes up to the Village stage. This might include a horde of zombies rolling across the countryside finding something or someone to feast on. Players who wish to keep their advancements will need to be vigilant.[9]

Elite monster coin events occur for nodes that exist between the Village and Metropolis stages. This level of event would include something along the lines of a dungeon level bosses and mobs coming into the world to pillage and destroy specific centers of activity.[9]

Epic monster coin events are of truly fitting proportions. These events occur randomly in the world as well as in realms where nodes have advanced to the City and Metropolis stages of development. This would be a legendary boss awoken from their long and deep slumber: A mighty dragon perhaps, whose sole purpose is to plunder to punish those who have summoned his malice and hate.[9] 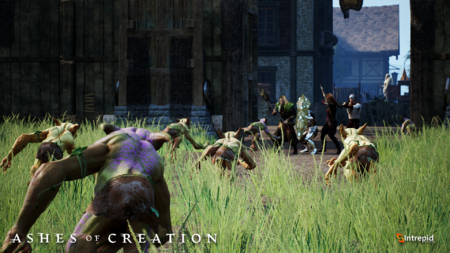 Enemies can only really grow stronger as the node grows, becoming outposts essentially for exiled or rivals of the existing order.[28] – Steven Sharif

There will be local, regional, or global (server-wide) announcements/notifications of important events.[28][29]

Event notifications will utilize different methods depending on the stage (scope and level) of the event.[28]

One important thing to note about events in general is notifications are sent to the players. Players can opt into these events in a similar way that you would into a quest. You're going to be presented with a 'would you like to participate' but they might not always be that way. You might hear trees falling in the forest and that may be an audio cue to tell you something's happening over there. It's out of the ordinary. This is not normally an audio cue that I hear in this area and i'm gonna go investigate that thing. So it might not just be always that kind of UI window represented with a 'participate or not' but I'm going to go investigate and in that sense it could be stage driven. So you might have the more local stage where it is just the visual or audio cues and you get to go participate in that stage; and then when it advances, or if you don't answer the problem in time, then it starts to expand regionally and then it might send out particular notifications to either citizens of the node from which it falls under its purview or even broader than that. It could be global driven events and then it could have things that are are visual cues that are really big like a giant blizzard that's affecting the zone, because the event hasn't been addressed; and that can affect the crop rotations or it can affect passages and roads and how caravans move. There's a lot that the predicate system informs to the event system and then the event system reacts to those types of predicates.[28] – Steven Sharif

Whether it be like a siege or a triggered event against a city or like a unique dungeon opportunity... those types of things are going to involve notifications. Especially to the citizens of the city; where you'll be informed of an impending event. Basically it will give you time.[31] – Steven Sharif